Rent prices are absolutely exploding in these two Ontario cities

It’s been well-established by this point that a mass exodus of young people from Toronto is (or at least was, for a time) driving up home prices in smaller communities all over the province.

This makes sense, given how impossibly expensive it is to buy a house in Toronto — but up until very recently, rent prices have been at historic lows in the city.

The distribution of which types of units and where in the GTA people are leasing may have changed amid the pandemic (who doesn’t want more space for less money?) but rent prices haven’t been driving people out of town the way house prices have been.

New data from Zumper suggests that this might be changing as Toronto’s rental market starts to recover and prices go back up.

Like Barrie, which in July experienced a surprising surge in median rent prices, Windsor and St. Catharines both just posted gangbuster gains for the month of August.

“After falling two spots in last month’s report, Toronto reclaimed its position as the second most expensive city in the nation, ranking right after Vancouver again, assisted by a 4.7 per cent bump up in rent last month,” reads the listing site’s latest Canadian Rent Report.

Meanwhile, says Zumper, “St. Catharines, ON was catapulted up three rankings to ninth by a 4.6 per cent rental monthly growth rate for one-bedrooms.”

With a median one-bedroom rental price of $1,360, St. Catharines has officially now entered the top 10 of the monthly rent report, which ranks the country’s 24 most populous metro areas by most to least expensive.

Year over year, the Niagara Region city of roughly 133,113 residents saw one-bedroom rent prices surge by 8.8 per cent and two-bedrooms rise 14.7 per cent to reach a median price of $1,640.

The only Ontario city that posted stronger gains was Windsor, with a year-over-year growth in one-bedroom rent prices of 18.9 per cent. Up 4.6 per cent over last month alone, the median cost of a one-bedroom rental in Windsor is now $1,130.

Two-bedroom units in Windsor now sit at an average of $1,420, representing a 5.2 per cent increase over the month previous and a staggering 24.6 per cent over the same time last year.

While Toronto is once again seeing rent prices go up month by month, Canda’s largest city is still posting declines in rent prices on a year-over-year basis, down 14.8 per cent for one-bedrooms and 15.1 per cent for two-bedrooms since last year at the same time.

Windsor remains the cheapest urban centre in Ontario for renters right now, but if prices in “South Detroit” keep growing at the same rate, it won’t stay that way for much longer.

Here’s how all 24 cities rank for rent prices right now, courtesy of Zumper: 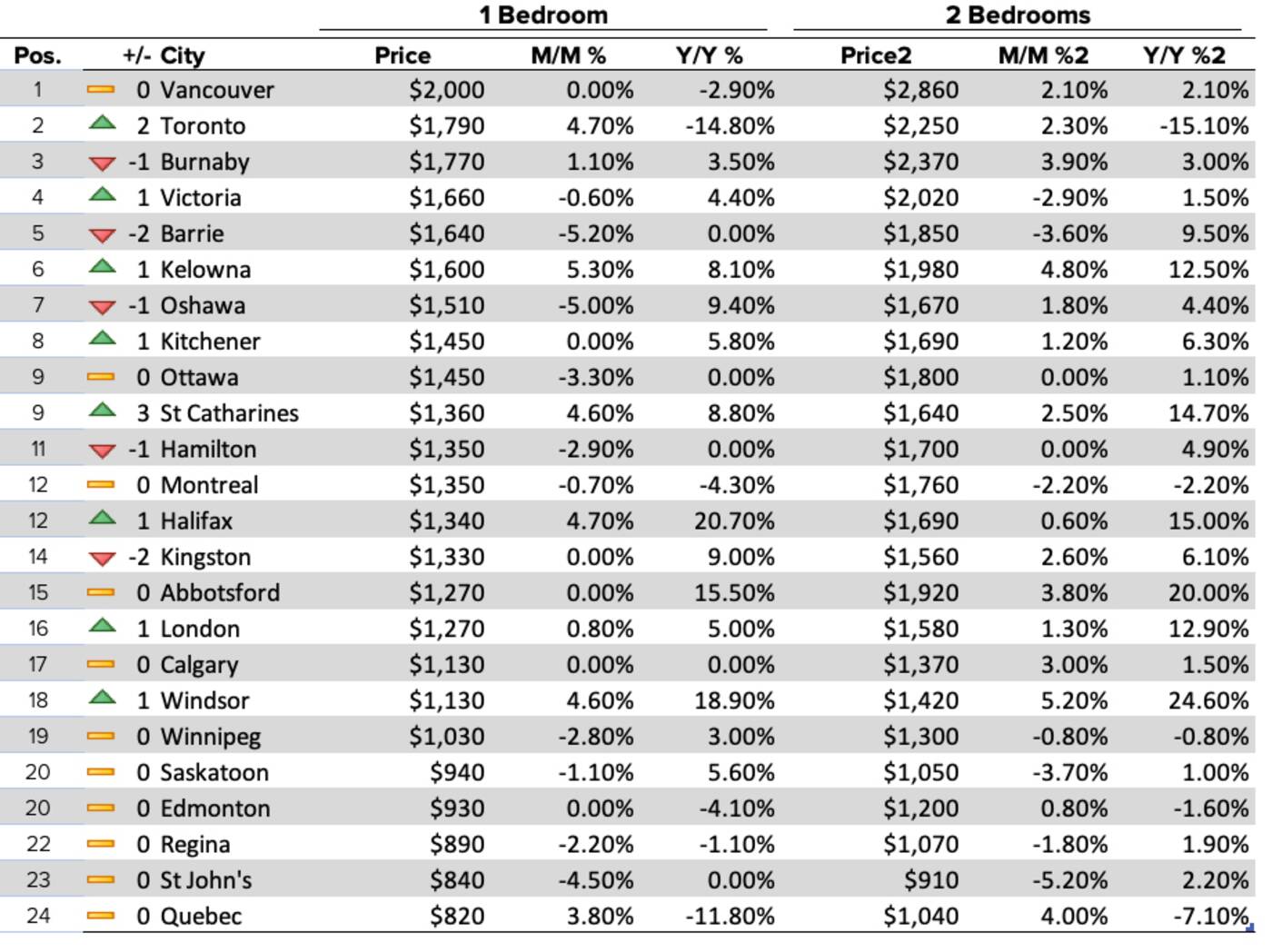